Why the Monarchy Should Have Died With the Queen 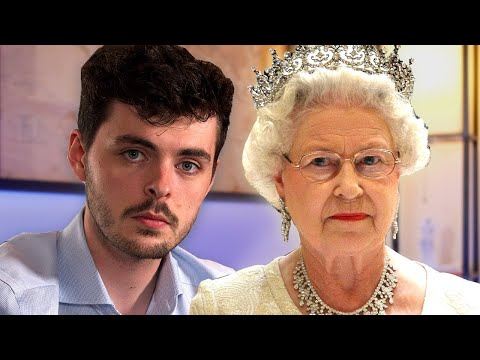 They are NOT above us, they are our equal.

The media and most of the world, wouldn’t agree with me.

I feel embarrassed…for them in their regalia,

on that balcony…they looked like a bunch of plonkers,

I can’t believe I just said that…

I gave him 6 minutes but he had lost my interest after the first couple of minutes - his delivery was too pompous and his tone was too sarcastic for me to want to listen.
It’s the kind of arrogant, sarcastically mocking style you can get away with when preaching to the converted and slagging off those who disagree with you but I don’t think it’s the best style to adopt if you want to persuade folk who disagree with you to listen to your point of view.

In the bit I did listen to, he seemed to be claiming that he had waited until after the Queen’s funeral to raise a debate about the monarchy but was being told that it was disrespectful to talk about abolishing the monarchy so soon after the Queen’s death.
I am not sure if that claim is valid - I have heard plenty of people who objected to anti-monarchy comments during the late Queen’s funeral processions, lying-in-state and funeral services - but they only said it was disrespectful to do it during the period of national mourning.
In fact many of them made the comment that once the Queen’s funeral was over, those dissenters could dissent as much as they liked.

When they have some concrete proposals and costings to compare with what we have now, I’d be happy to read their full proposals - but I’m not wasting any more of my time listening to the rest of that sarcastic, condescending lecture on that video.

Thank you Boot, I agree 100% with everything you said. I too lasted only about 5 or 6 minutes, couldn’t bear his arrogant, sarcastic tone any longer than that. Irritating, pompous little smart ar$e.

Maybe talk about it in a year or two when Charles is settled in, break it to him slowly.

Why? Why should a replacement government structure always end up with a monarch or a president? There are lots of designs of government structures - not all have a single president as head of state. And that’s before we get into how, if a president were to exist, the candidates for that role are voted into place.
I do think a broader view of how countries are governed and how governments are voted into place is needed. And I really do think the UK would benefit from change in this area.

What a d’head that kid is. It is not just the royality it is also the years history behind it. The French did away with their royal family and now attracts zero tourists. Holland and the Dutch still have theirs and no one says they should no longer exist .
I say if people are so against us having a royal family go live in North Korea or Russia where you are not even allowed to criticise those in power. I get really fed up with those cannot be proud of what we have which only a couple of other countries have. People are too keen to knock what makes this country stand out from the rests.
OK maybe we have too many “Royals” agreed but let us keep what we do have and brings tourist money into Great Britain

If the Royals were gone…

It certainly hasn’t done much to stop idiots being in power here - just look at our last two PM’s, the disgraced Johnson and the nincompoop Truss…

If the Royals were gone…

It certainly hasn’t done much to stop idiots being in power here - just look at our last two PM’s, the disgraced Johnson and the nincompoop Truss…

That’s what you get when “royalty” are deposed - despots … even our own Cromwell, for whom I have some admiration, was tempted by the trappings of power:

In 1657, Cromwell was offered the crown by Parliament as part of a revised constitutional settlement, presenting him with a dilemma since he had been “instrumental” in abolishing the monarchy. Cromwell agonised for six weeks over the offer. He was attracted by the prospect of stability it held out, but in a speech on 13 April 1657 he made clear that God’s providence had spoken against the office of King: “I would not seek to set up that which Providence hath destroyed and laid in the dust, and I would not build Jericho again”. The reference to Jericho harks back to a previous occasion on which Cromwell had wrestled with his conscience when the news reached England of the defeat of an expedition against the Spanish-held island of Hispaniola in the West Indies in 1655—comparing himself to Achan, who had brought the Israelites defeat after bringing plunder back to camp after the capture of Jericho. Instead, Cromwell was ceremonially re-installed as Lord Protector on 26 June 1657 at Westminster Hall, sitting upon King Edward’s Chair, which was moved specially from Westminster Abbey for the occasion. The event in part echoed a coronation, using many of its symbols and regalia, such as a purple ermine-lined robe, a sword of justice and a sceptre (but not a crown or an orb). But, most notably, the office of Lord Protector was still not to become hereditary, though Cromwell was now able to nominate his own successor. Cromwell’s new rights and powers were laid out in the Humble Petition and Advice, a legislative instrument which replaced the Instrument of Government. Despite failing to restore the Crown, this new constitution did set up many of the vestiges of the ancient constitution including a house of life peers (in place of the House of Lords). In the Humble Petition it was called the Other House as the Commons could not agree on a suitable name. Furthermore, Oliver Cromwell increasingly took on more of the trappings of monarchy. In particular, he created three peerages after the acceptance of the Humble Petition and Advice: Charles Howard was made Viscount Morpeth and Baron Gisland in July 1657 and Edmund Dunch was created Baron Burnell of East Wittenham in April 1658.

The USA is probably worst in the world for family “dynasties”:

Unpacking the US Aristocracy: Inside America’s Wealthiest 50 Families - Non...

Most studies of billionaire wealth have focused on tech titans. But much of the billionaire class relies on wealth it inherited long before the tech boom.

You do that he is an atheist ?

What a d’head that kid is. It is not just the royality it is also the years history behind it. The French did away with their royal family and now attracts zero tourists. Holland and the Dutch still have theirs and no one says they should no longer exist .

Where do you get the idea that France has zero tourists. On the contrary after the pandemic tourism soared .They have palaces castles and other sights they don’t need a royal family to attract tourists .

Whenever I read here, that question comes to mind. I’m hoping you get an answer to it. I haven’t seen one yet that makes sense to me, other than more misinformation about how the Presidency works.

I stuck with the video all the way, If you stop thinking about the young man’s way of speaking, he actually brings up a lot of valid points, and questions I would like answers to.
I’m not saying he’s correct in everything, but he’s not wrong either.

Give me some. Data on the French tourist industry increase in relation to palaces etc muddy as you appear to have the information

And they would be elected to a position every citizen could attain, not perpetuating the inherited wealth and privilege class system

Countries that elect bad presidents and leaders have only themselves to blame and they can always see that, vote them out and vote someone better in

Whereas we are stuck with the royal family forever, however badly they behave

Expect to see more of Prince George and his sister.