How much will you spend on a meal?

I’m asking because we are going out for lunch today …… wedding anniversary! OH says “you choose where to go” but I know he hates spending loads on food. He is not what I call a mean person because if I said I wanted a new car for my anniversary I can hand on heart say he would buy me one. Same with holidays, I just booked a week in the sun for us in June and he pays. He just has this thing about paying over the odds for food.

He also doesn’t like food where it’s all stacked up and people have used their fingers to do so. Neither of us like nouvelle cuisine either where there’s more plate visible than food.

. We haven’t been there for ages but the food is always fine and the service is good. We have been to posh places but he always says (when we get home) that it was overpriced. I sometimes go for afternoon tea with girlfriends and he can’t believe we will pay £18 or so for sandwiches and cakes and a pot of tea!

Have you ever been to a garden centre restaurant?

They usually do home cooked food, plenty of different choices to choose from, I haven’t been to one since lockdown, they were very reasonably priced.

You could always go to Ikea!

I don’t like rip of food but if you are going to a nice restaurant you are not just paying for the food but for the service and ambience. The whole experience is in the cost. I would say £30 is a bargain for a nice meal with drinks. £40 is normal for a decent meal. But if it’s just lunch with no booze then under £20 for sure. Pub lunches are lovely but some these days are just exorbitant. I guess that they have to make up for lost custom due to covid.

I agree with Pauline, garden centre restaurants are very good, plus you can look around them after & spend money. The one near us sells all sorts of items.

For our Anniversary we only pay upto £30 for both of us.
But we normally go out to a Indian Restaurant.

I tend to go for the cheap and cheerful, and always look at menu prices before deciding whether to go in or not. My friends back in Essex, though, think nothing of spending an absolute fortune on a meal and have paid for mine so many times I owe them a lot! Waiting for them to spend time here in Lowestoft so I can treat them. They will also tip massively.

We usually go for a Italian or Chinese meal on our anniversary, which is somewhere around the sixty pound mark, as I tend to splash out a little as it’s the few times we eat out.

Years ago for our fifth anniversary, I did book dinner at the Ritz in London as a strictly one-off experience. That WAS expensive, but it was worth doing the once just to say we done it.

The one I used to go to, we would sit and eat our meal, in beautiful surroundings, looking at the trees , shrubs, bedding plants, etc,etc, lovely relaxing environment.

When I take the missus out there’s no expense spared….she just has to decide wether she wants cheese n onion or salt n vinegar….

When I take the missus out there’s no expense spared….she just has to decide wether she wants cheese n onion or salt n vinegar….

When I go out with the family we have to decide which meal we want from the saver menu. I usually opt for a Happy meal, I like the toys.

We used to go to pub/restaurant near Hemel Hemstead… It was excellent food. For the two of us it was around £50 - £60.

We went out for lunch today: £18 for the two of us, an old favourite Cantonese joint with character, a bit studenty and bohemian, excellent nosh.

Most expensive meal I paid for was at Emeril Lagasse’s restaurant in New Orleans. It was about $75.00 a plate and the food was fantastic, but not $75.00 fantastic. At my age I want good food at a reasonable rate. I usually look for so called “Mom and Pop” owned diners.

How much would I spend on a meal?
Well all I can say is that they wrote this with me in mind: 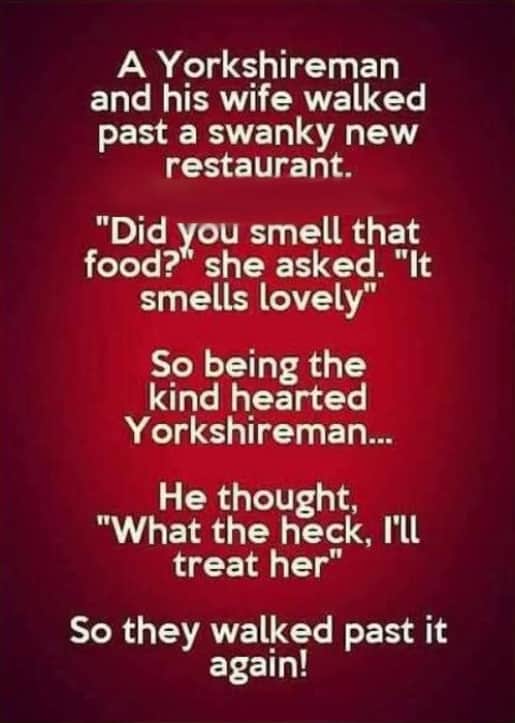 I’m worse than your husband because I like to cook myself and hate paying out for food I could have knocked up myself!

Well we DID go for a 2 for 1 at a Marston’s place and it was excellent.

We both had 8 oz steaks and they were beautifully cooked. I had scampi with mine and we both had chips, tomato, big mushroom and peas. We had an alcoholic drink each and a nice dessert each and the bill was just over £37. We both agreed it was excellent value and perfectly cooked. The staff were polite and helpful and we had a nice window seat with the sun pouring in.

An upmarket pub near us charges £25 for a steak meal and my friend went and said it was gristly and she wasn’t impressed. My OH would never pay that in a million years.

That’s what my OH says! He reckons my cooking is better than most meals we have out but he does realise that I like a treat now and again.

An upmarket pub near us charges £25 for a steak meal

Not a Miller & Carter restaurant was it? We’ve heard they are high priced, bad steak, emporia.

An upmarket pub near us charges £25 for a steak meal

Not a Miller & Carter restaurant was it? We’ve heard they are high priced, bad steak, emporia.

I’ve been to Miller and Carter once, it was very nice but dreadfully expensive.

That’s what my OH says! He reckons my cooking is better than most meals we have out but he does realise that I like a treat now and again.

That’s why when we do go out in the evening, I like something different that I might not cook, curry, japanese, lebanese, Greek

But someone said garden centre, we’ve got one near us that does really nice lunch 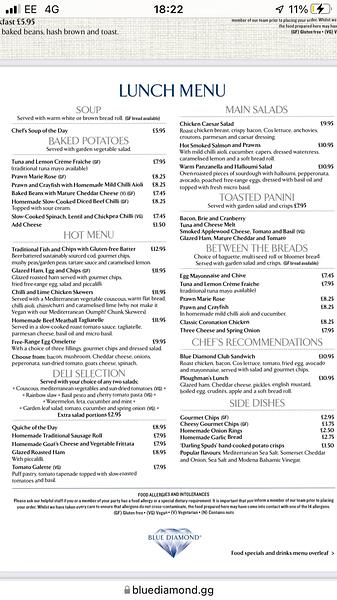