I was given an Amazon voucher as a Christmas present, which I have now spent
However it would appear that I have automatically been signed up for Amazon Prime for a 30 day trial, which I don’t want

Now I have the problem of getting out of Amazon Prime
I have eventually found the cancellation procedure, which starts with the Amazon Prime general account screen, and from there I should proceed to -
Manage - Update - Cancel and More - End Trial and Benefits

However, nowhere on the screen can I find ‘Manage’ which makes me wonder if I am actually a member
Or if I am, but the cancellation procedure only starts after I’ve started to pay? which would be very annoying

From previous dealings with Amazon this has done nothing to change my opinion that their procedures and website are deliberately confusing and difficult to follow, and designed to relieve you of your money in as many sly ways as possible

I don’t buy much from Amazon, I’m thinking that it might be easier to cancel my account for the whole shebang

Alright, rant over, so please, how can I cancel my Amazon Prime Membership?

Go to your bank and request that they stop any transaction Amazon tries to take any money.
They can cancel on your behalf ,i know this as when i was waiting to be served a young man did just this.
And it was a success.

how can I cancel my Amazon Prime Membership? 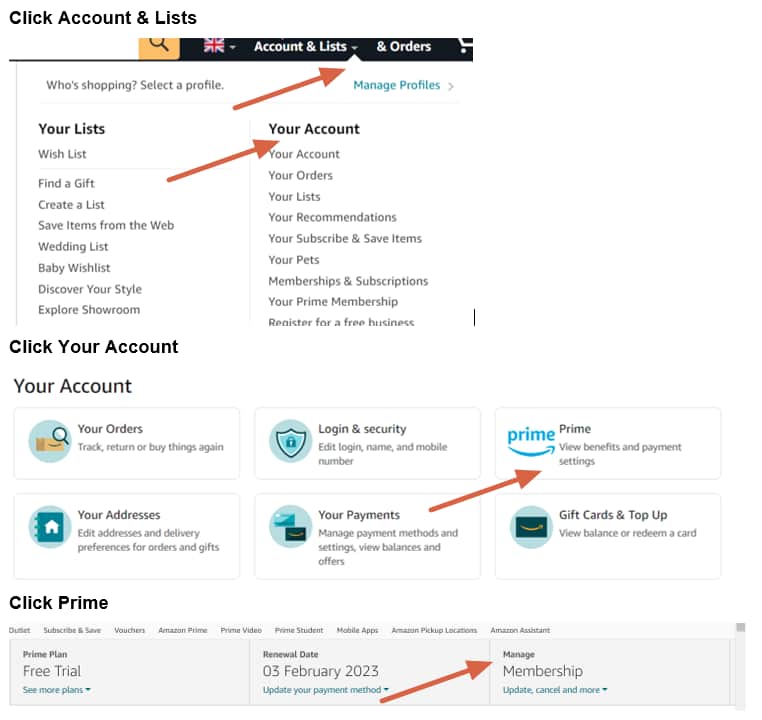 OMAH, thanks for that

As I’ve done a couple of times in the past hour or so I’ve clicked on Accounts & lists, then Your Account, then Amazon Prime, and I get a screen telling me how wonderful Prime is

and a tick box - Start your 30 day trial

So I assume that I’m not actually a member of Prime yet, and if I leave it unclicked I won’t be?

So I’ll do that, and if in the next few weeks I find my Amazon & Credit Card accounts are being charged & debited, I’ll cross that bridge when I come to it

I’m on a free trial - If I click Manage then I get: 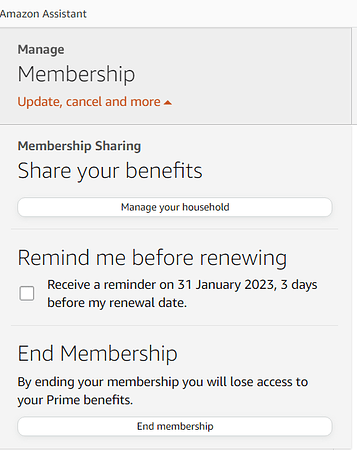 I accidentally joined Amazon Prime a few years ago and promptly cancelled it, then shortly afterwards regretted it. I think the service I cancelled was on special for something like $30 (£15) for the first year after the 30 day trial.

When I did rejoin I ended up paying the full annual annual fee of $56 or $59 (£30). I more than make that back in postage charges. Plus I get a streaming service I rarely watch.

Deffo shot myself in the foot there.

I was on Amazon Prime. It was simple to cancel via my Apple account. I’m not sure why it is a hassle for you. Good luck.

Yep, that was my experience too. I can’t remember exactly how but it was easy to find in my Amazon account and cancel. If it had been a bit harder I might not have cancelled and saved myself some money

I’ve accidentally joined a few times and then cancelled right away. But you still get the 30 days trial even if you cancel the next day. I’ve always googled to find out how to cancel and there’s lots of advice out there.

I’ve always found Amazon Prime to be pretty good at cancelling membership and even refunding a subscription they have taken if you forget to cancel after the 30 day free trial.

I don’t often buy stuff from Amazon but, when I do, they usually offer me 30 days free trial which I accept if it gives me free postage for whatever I’ve ordered, then I put a note in my diary to cancel my membership within 30 days, before they take the first payment from my credit card.
I find it’s easy to cancel my membership.
On a couple of occasions, I have forgotten to cancel and only notice the first month’s fee when I check my credit card statement. If I haven’t used any Amazon services since the 30 day free trial ended and I cancel my membership within a month of the first payment, they automatically refund the first month’s fee that they have taken.
From what I’ve seen on their website when I’ve cancelled my membership, this seems to be their standard policy. 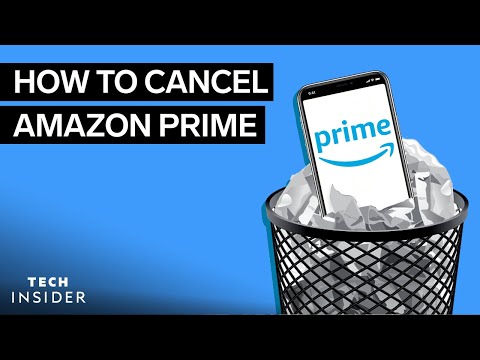 How to cancel Amazon Prime in 4 steps

Find out how to cancel your Amazon Prime membership quickly and simply with our handy guide.

Happened to me they would not let me cancel saying I was not a prime user . Had to report to my bank and get a new debt card, was refunded the last 3 months payments by bank as they deemed it fraud.