Diary of a heart attack

Carol I have appreciated your experiences and narrative you have kindly added. Others should/could appreciate that.

What I struggle to understand is, what the race of the nurses has to do with their treatment of you?

Well, there was this Indian nurse who went off to make a cup of tea for an Indian patient but when I asked for one she wouldn’t make me one.

Later when I asked again she made me one but slammed it down on my table. Then she took one to the Indian lady in the next bed & stayed chatting to her…

It’s hard to explain. It was just something I could sense.

That is good news … and pretty good considering you discharged yourself when it was on offer. Are you having your stent fitted at the same time?
The sooner the better. My brother has two now and is fine, and has considerably more energy.

Yes I’m pleased it’s come so quickly.
I shall be in limbo all of November but after the procedure I will be able to drive my car & generally get back to normal.

The angiogram & stent will be done at the same time. I’ve been told to take an overnight bag in case they keep me in.

Stents are nothing to worry about Carol, I’ve got seven. Three after my first heart Attack and four after my second heart attack. I’ve also been fitted with an ICD (Implantable Cardio pacer and Defibrillator) I’ve got metal bits in my right arm following a road accident when I was 18, and a mouth full of fillings…Mrs Fox says when I die and they take me to be cremated, she will ask them if they will cast a bust of Beethoven for the mantle piece…

Hi Carol i am pleased to read you are home ,but shocked at the appalling in treatment you received while in hospital.
The pictures of your bruising took my breath away.

Oh Carol what an ordeal you’ve been through. I know our nursing staff are unimaginably stretched at the moment, and their stress levels must be through the roof, but it does look to me as if you have reason to complain about some of the treatment you’ve received. I do hope you continue to recover well.

And thanks for writing this blog - it could be very helpful to others here in identifying what is happening to them. You always think of a heart attack as being a sudden, intense pain, which brings you to the point of collapse. That seems to be true for men, but for women it can be so very different. You’ve so clearly described how it was for you, so now we know what to look out for.

I woke up on my 50th Birthday after an emergency quadruple bypass.

It was what you might call a typical heart attack, a sudden searing pain going from my heart done my left arm, no warning, I was eating fish and chips and watching star strek at the time, no warning at all.

Things were different 20 years ago and I was very well looked after in a specialist cardiac unit in a teaching hospital.

I was home in a week rather than the 3 weeks and had hospital transport 3 days a week to a Cardiac Rehab unit with a named nurse and physio, and an exercise and diet regime.

You could not have asked for more or better treatment.

The actual operation was somewhat unusual as I had a full length metal leg brace at that time and had to be earthed by an electrician in the operating theatre.

I was told that the bypass would last for 10 years, but it lasted for twice.

Fast forward 19 years, what a difference.

A serious wait for an ambulance after a 999 Call, then into triage, then Pit Stop, then resus and nearly a day later into Acute Medical Unit , which is not a ward, but a holding unit until space on a Specialist Ward becomes available.

It is so very different to what you expect and see on TV and I have every sympathy for you Carol.

It is also very confusing and stressful.

When the ambulance crew take you through the Hospital Doors you ave not been admitted to hospital, you are not officially a hospital patient.

You can undergo Primary Triage to see if you need A&E or can be sent home and then, depending on your hospital, you can go into a secondary triage bay, ours is called the Pit Stop.

Readings are taken, including a blood test, the blood test is for an enzyme called Troponin T, produced when heart muscle dies.

It is the only way of showing conclusive proof of a Heart Attack, and even then you need two readings a few hours apart.

The units vary, but say up to 20 is normal, our cells are naturally replaced as we live.

Anything above that is a sign that you may be having a heart attack.

My minimum now is 48, a mild heart attack for most people, but not unusal for someone with my particular condition.

Some things are however standard.

You will not be given paracetamol unless you have a temperature and all medication has to be written up, ie signed for administration by a Doctor.

You will not be given anything to drink except a few tiny sips of water in case you need to be operated on.

This is where the confusion starts, if someone has been admitted with a condition which is purely medical and will not require surgery, then they will get a cup of tea or coffee and even a sandwich.

It is not a matter of who you are, but where you are in the system.

It is galling to see others getting what you need but you are not.

It is the same with the amount of time Nurses spent with Patients.

You are obviously a very strong and intelligent person.

They will concentrate on those who need reassurance, not everyone in Resus is having a heart attack and some need more reassurance than others.

As for getting a shower, you are joking.

You are not going to get one until you are on proper ward, been assessed and the Nursing Staff have the time.

Resus and Cardiology wards are not single sex, they are for seriously ill people.

There is no modesty on either, it is a keep you alive thing.

If you decide to discharge yourself, that is your choice, you will get no further help, just an outpatients appointment, and you start from there.

You are very fortunate in getting an outpatients appointment so soon, when I was in Car
diology earlier this month even In patients were waiting more than a month

I went for my angiogram today. The good news was: I didn’t need to have a stent fitted.

The consultant told me one artery was very slightly narrowed & the others were fine. He believes my mild heart attack was caused by the pneumonia I had contacted at the time & he reassured me my heart condition shouldn’t deteriorate any further.

The only set back was the way my wrist bled when they removed the canula. It bled so much I thought I was going to become a medical emergency! 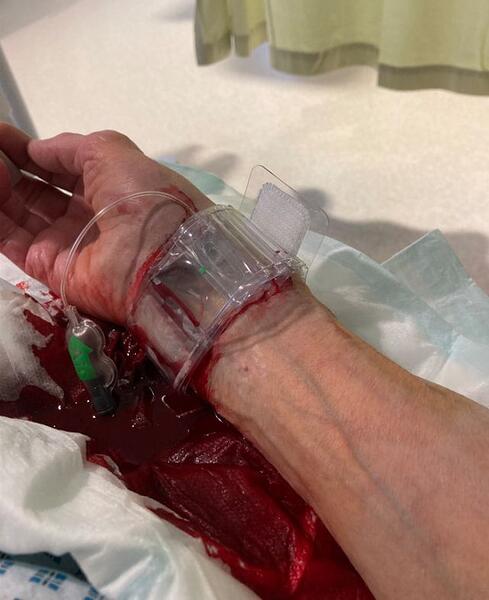 Good grief Carol that looks awful you must have thin blood , I bleed out quickly too. Did the nurses panic ? They say it’s better to have thin blood as it doesn’t clot, but I think it may be an old wifes tale .

Glad your heart is strong and your health better

Good news then about your future health. Sounds reassuring.

Have they indicated when you can resume driving (once your wrist has healed. Looks dreadful!!!)

I can drive again in a week. It will be nice to resume my normal life.

Today, my hand & wrist hurts so badly I am functioning with one hand only…

Pleased about the driving soon, Carol. Maybe by that time your arm will have healed sufficiently. Get well soon. Hope Tony was ok.

I’m sorry to hear that you went through that. You know, when I was younger I used to hate it when my grandmother would say: “At least you have your health.” Now when someone says it I agree completely.

5 weeks since my heart attack. I thought I was getting back to some normality but I feel I’ve had a knock back…

Last night I felt a few twinges in my heart /rib region & wondered if it was going to be another heart attack.
I went to sleep in the spare bedroom so as not to disturb Tony - only I didn’t sleep.

I decided to pack a hospital bag just in case I needed to send for an ambulance. I wrote a note out for Tony with all the kids phone numbers on them & also I wrote a text message to Ady asking him to look after his dad, ready to be sent when I was in the ambulance.

I had decided not to wake Tony up. He sleeps well so why worry him?

When I had done all this I lay down in bed waiting.

About 4.00am I realised nothing was going to happen & I eventually nodded off until 5.30. I’ve been awake since then reading & chatting to people on my ‘heart attack’ forum. Apparently it’s common to feel fear & anxiety at the slightest twinge. A lot of the people I spoke to take anxiety medication & I’ve decided I’m going to ask my doctor for some.

I didn’t realise how much it would affect me mentally…

Hang in there, Carol! Two years ago I got seriously ill to the extent that I wasn’t aware of my surroundings. According to my and the doctor wife it was debatable whether I would make it. I did. And you can too!

No wonder your worried dear Carol , how concerning for you . I hope doc sorts out your medication

Following a heart attack it’s only natural to think that every little twinge is the onset of another event Carol. I’ve had quite a few nights like the one you described, but I’ve resigned myself to the thought of “Bring it on” and just hope that I survive the next one.

I filled in an e-consult this morning & the doctor rang me.

She asked me if I was happy to talk on the phone or did I want to come & see her. I said the phone was fine.

She has prescribed a glyceryl trinitrate under tongue spay for if I get chest pains again. This, she thought would give me a feeling of security.

It means I’ll have to wait a while longer but I’m pleased she’s doing that rather than just give me any old anxiety medication.

She was also going to look into any groups that I could join.

She’ll get back to me in a few days when she hears from the cardiologist.
Until then I’m trying to keep my anxiety under control…

Mr M has them he has never had used them

Mr M has them he has never had used them

I was prescribed them after my attacks but like Mr M, I never had to use them and they are no longer on my medication. I think they are more for the pain associated with angina.